Turkish leader Erdogan, who became the “birthday hero” of the NATO summit in Madrid, removed his objections to Sweden and Finland joining the alliance , continues to swagger. The Turkish President openly frightens the Swedes and Finns by blocking their acceptance if they do not follow his lead, swears at the Greek “allies” and talks about close ties with Russia. 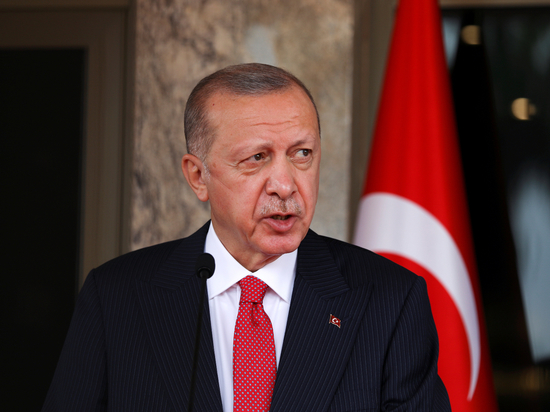 The agreement signed with Finland and Sweden to lift Turkey's veto on their applications for NATO membership does not put an end to this matter and obliges the Scandinavian states to keep their promises, President Recep Tayyip Erdogan said on Friday.

After four hours of talks in Madrid on Tuesday, Erdogan and his Finnish and Swedish counterparts agreed on a series of security measures in exchange for support from Ankara, which has raised concerns about terrorism and an arms embargo, according to the Turkish Daily Sabah.

Speaking to reporters on his way back from the NATO summit in Madrid, Erdogan said there was no need to rush to ratify the two proposals in parliament. According to him, Ankara must first check whether Stockholm and Helsinki are fulfilling the promises made under the memorandum, including the extradition of suspects wanted by Turkey.

“It should be known: these signatures do not mean that the issue is resolved… Without the approval of our parliament, this will not come into force. So there is no need to rush,” Erdogan said.

“The ball is now on their side. Sweden and Finland are not currently members of NATO. If there is any mistake, we already have irrefutable documents, and we will do what is necessary,” the Turkish president threatened.

Erdogan said the decisions made in Madrid will bear fruit over time. “The promises that were made are important, of course, but the main thing is their fulfillment,” he said, referring to the landmark memorandum signed between Finland, Sweden and Turkey.

By signing the memorandum, Turkey withdrew its objection to the application of the Nordic countries to NATO. In return, Finland and Sweden pledged to address Turkey's terrorism problems. However, Erdogan said that Turkey would be cautious as “a country that has repeatedly been stabbed in the back in its fight against terrorism.”

“We will closely monitor whether the promises made to our country will be fulfilled in the coming period,” he said.

“From now on, it will be much more difficult for members of the PKK (Kurdistan Workers’ Party – MK) and FETÖ (the movement of supporters of US-based Fethullah Gülen) to carry out terrorist propaganda, attack our country and our citizens and commit acts of vandalism,” he said.

“Sweden will extradite us 73 terrorists. So far, 3-4 of them have been sent, but this is not enough. The Ministry of Justice and the Ministry of Foreign Affairs, MİT (Turkish national intelligence) will firmly keep this issue under control,” Erdogan added. The Turkish President emphasized that as a result of Ankara's efforts at the Madrid summit, the PKK and its Syrian branch of the YPG, as well as the Gulenist FETÖ movement, were described as terrorist groups for the first time in NATO reports.

When asked about the extradition of suspects, Erdogan said that if the Nordic countries do not send these individuals, “then we will do everything necessary through our institutions and units.”

While Sweden and Finland swallow the humiliation of Ankara, the deal between Turkey and the two northern European countries has caused clear disappointment in Greece. The leader of the opposition movement SYRIZA and former Prime Minister Alexis Tsipras, in an interview with Open TV, said that this achievement at the NATO summit in Madrid was “a diplomatic Waterloo for the Greek positions.” The politician accused the conservative New Democracy government of setting the bar too low, while he accused them of being satisfied that the issue of the sovereignty of the Greek islands was not raised at the summit by President Erdogan.

The former Greek prime minister said: “We should be concerned not only with the sale of F-16s to Turkey, but also with the confirmation of the overall support for Turkey from the West.” Tsipras went on to accuse the government of Kyriakos Mitsotakis of “conducting a dangerous foreign policy” that “leads us from defeat to defeat”.

At the same time, Erdogan said on Friday that he refuses to meet with Greek Prime Minister Kyriakos Mitsotakis until the Greek leader “will not pull himself together.” Regarding relations with Athens, Erdogan told reporters upon his return from Madrid that NATO leaders at the summit offered Mitsotakis to mediate and organize negotiations.

“We said, 'I'm sorry, but we don't have time for such a meeting right now.' Because it is obvious that they are militarizing the islands,” Erdogan said. “Let him take matters into his own hands. Until he pulls himself together, we are not destined to meet.”

Later the same day, Erdogan also addressed reporters in Istanbul and stated that Turkey had no desire to go to war with Greece, adding that Athens they did not keep their promises and violated, according to him, Turkish airspace 147 times.

Historical rivals Turkey and Greece disagree on issues ranging from overflight and the status of the Aegean islands to maritime borders, hydrocarbon resources in the Mediterranean and the ethnically divided island of Cyprus.

Recently, air tensions have flared up again. space and status of the demilitarized islands in the Aegean. Erdogan said Mitsotakis “no longer exists for him” after the Greek prime minister lobbied the United States not to sell F-16 fighter jets to Turkey during a speech to the US Congress.

For its part, the Greek government calls the demand a deliberate misinterpretation and accuses Turkey, also a NATO member, of intensifying hostilities in the area.

Meanwhile, according to the Daily Sabah, against the background of the new NATO security policy, Erdogan said that Turkey has a “balanced policy” in relations with Russia and Ukraine, because it does not want to harm its “diplomatic traffic”.

He said that Turkey has ties to Russia and receives almost 40% of its natural gas from Russia. “On the other hand, now we are working on nuclear energy, the Akkuyu power plant. The foundation for the fourth part will be laid in a few months, possibly in July,” he said.

According to him, in addition to energy, Turkey and Russia also cooperate in the defense industry.