Russia continues its special operation in Ukraine. The units of the People's Militia of the LPR were able to recapture the Uglegorsk CHPP from the Armed Forces of Ukraine. The head of Chechnya, Ramzan Kadyrov, called on the Ukrainians to avoid declaring war by Russia, “to remove the Zelensky noodles of pseudo-patriotism from their ears.” Meanwhile, Ukrainian troops shelled Alchevsk from the American MLRS HIMARS. Read online of the previous day of the special operation here. 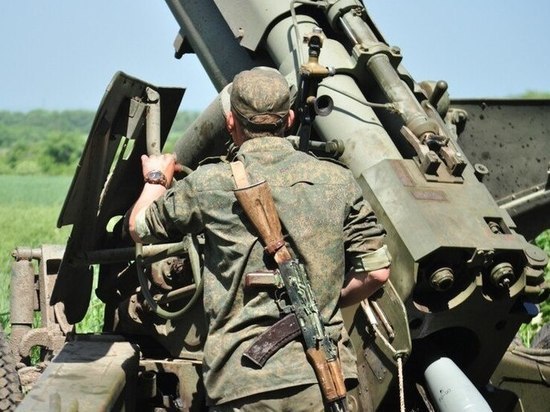 12:40 Ukrainian President Volodymyr Zelensky dismissed Ruslan Demchenko from the post of First Deputy Secretary of the National Security and Defense Council. During the time of Viktor Yanukovych, he was Deputy Minister of Foreign Affairs. He was also present with Petro Poroshenko in Minsk at the signing of the Minsk agreements.

12:25 The Russian Ministry of Defense also reports that the RF Armed Forces, as part of a counter-battery fight, suppressed four platoons of Grad multiple launch rocket systems; APU in the DPR. Also, Russian aviation, missilemen and artillerymen destroyed four weapons depots of the Armed Forces of Ukraine together with the S-300 air defense radar.

In addition, it is noted that the Russian Aerospace Forces destroyed more than 100 nationalists and foreign mercenaries with a strike on the 95th brigade of the Armed Forces of Ukraine in the DPR. And Russian air defense systems shot down six Ukrainian UAVs in a day. They also intercepted six shells of the Uragan multiple launch rocket system. At the same time, Russian aircraft, missilemen and artillerymen hit six command posts of Ukrainian troops in the Zaporozhye and Mykolaiv regions.

strong> Peskov said that the words of German Chancellor Scholz that Russia is an unreliable gas supplier contrast with reality. According to the Kremlin speaker, Russia is not interested in a complete cessation of gas supplies to Europe. Pumping along the Nord Stream after the installation of the repaired turbine, it will go to the extent that it is technologically possible.

12:17 According to the Ministry of Defense of the Russian Federation, high-precision sea-based weapons in the Khmelnytsky region managed to destroy the transshipment base with US-supplied HIMARS MLRS ammunition.

12:15 Dmitry Peskov said that a strike on military infrastructure in the port of Odessa cannot and should not affect the process of shipping grain as part of a “grocery deal”. According to him, he is not connected with the infrastructure that is involved in the implementation of these agreements.

12:12 The Russian Ministry of Defense reports that an attempt to nominate and landings from high-speed landing boats of the Ukrainian sabotage group on the territory of the Kherson region. As a result, two boats with saboteurs on board were destroyed.

11:46 Mariupol Mayor Konstantin Ivashchenko said that at least 90% of payments in the city are made in rubles. However, the hryvnia is also accepted.

11:42 NATO Secretary General Jens Stoltenberg said that the alliance will send hundreds of man-portable systems to Ukraine to combat drones. He will also continue to provide military assistance.

11:22 The authorities of Kazakhstan have allowed banks to export Russian rubles in cash. Prior to this, in March, the export of foreign cash from Kazakhstan was limited by the decree of President Tokayev.

11:15 The state budget deficit of Ukraine at the end of 2022 will be about $50 billion, or 30-35% of GDP. At the same time, $7 billion was previously expected. This is the estimate of Zelensky's economic adviser Ustinenko.

10:48 The head of Zelensky's office said that Polish PT-91 tanks had already arrived in Ukraine.

10:42 The DPR Territorial Defense Headquarters reports that allied forces are mopping up the Uglegorsk TPP.&nbsp ;

10:38 The referendum on joining Russia in Zaporozhye and Kherson regions may take place on the same day. Such a decision will reduce the number of provocations from Ukraine, as reported by Vladimir Rogov, a member of the main council of the military-civilian administration of the Zaporozhye region.

10:26 Ukrainian edition "Country" reports that the British L119 towed howitzers of 105 mm caliber have been delivered to the territory of Ukraine. The maximum firing range from it is 13.7 km.

9:58 A member of the Human Rights Council under the President of the Russian Federation, Kirill Kabanov, said that the proposal to rename the Kievsky railway station in Moscow because of the ongoing special operation puts Russia on a par with those who show anti-Russian hatred. So he reacted to the words of the State Duma deputy from the LDPR Vasily Vlasov. He proposed to rename the Kyiv railway station to Bryansky.

9:26The FSB of Russia also reports that the chief investigator of the Bellingcat publication (recognized in Russia as a foreign media agent) Khristo Grozev participated in the plans of Ukrainian intelligence to hijack Russian Aerospace Forces aircraft. In addition, it became known that the navigator of the hijacked aircraft was planned to be poisoned with clonidine. The drug was delivered to Volgograd.

9:12 The FSB of the Russian Federation reports that Ukrainian military intelligence was considering the possibility of hijacking a Russian Su-24, Su-34 or Tu-22M3. The Armed Forces of Ukraine were going to simulate the interception of a hijacked Russian military aircraft. But the Ukrainians, while preparing to hijack the aircraft of the Russian Aerospace Forces, themselves revealed to Russia the layout of air defense systems and airfields of Ukraine.

9:08The  Daily Express reports that Boris Johnson intends to visit Ukraine before he finally leaves the post of British Prime Minister. It is noted that Johnson “feels the burden of responsibility, because he was the biggest supporter” President of Ukraine Volodymyr Zelensky.

Head of the Office of the President of Ukraine Volodymyr Zelensky, Andriy Yermak, announced the US intention to transfer 25-30 HIMARS and MLRS multiple launch rocket systems, spare parts and other equipment to Kyiv.

Chapter The Russian Foreign Ministry Sergei Lavrov promised that the Russian Federation would help the Ukrainians get rid of the anti-people regime, which wanted to deprive them of history and make them an enemy of Russia. He also noted that Moscow has no prejudice about resuming negotiations with Ukraine on a wider range of issues. But the choice is up to Kyiv.

Meanwhile, North Korean authorities called the United States a “biological terrorist country”, accusing Washington of conducting experiments with pathogens on the territory of Ukraine and other countries.