Two leaders' talk highlights sharp differences between China and US

Chinese leader Xi Jinping advised US President Joe Biden not to “play with fire” over Taiwan during a two-hour conversation. 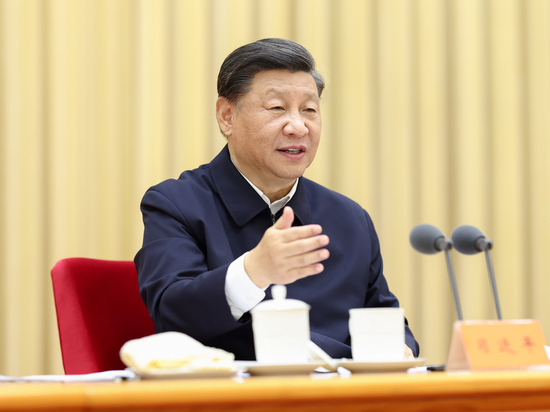 U.S. President reiterates opposition to peace threat in Taiwan amid tensions between Washington and Beijing due to a potential trip to the island by Speaker of the House Nancy Pelosi, writes The Guardian.

China's chief warned Joe Biden against “playing with fire” on Taiwan in a long-awaited call that lasted more than two hours Thursday as tensions remain high over a potential Pelosi trip to the island next month.

“He who plays with fire will perish by it. It is hoped that the US will have a clear view on this,” Xi Jinping said in a statement. He also urged the US to implement three joint communiqués that serve as the basis for relations between the two countries “both in word and in deed.” Xi Jinping vowed to “resolutely” defend China's national sovereignty and territorial integrity and said it expressed “the firm will of more than 1.4 billion Chinese.”

This is not the first time Xi has used such language, The Guardian notes. to dissuade Washington from publicly supporting Taipei. Last November, Xi Jinping also warned the US president at a virtual summit that China was ready to take “strong action” if Taiwan took any steps toward independence that went beyond Beijing's red lines.

In response to Xi Jinping's comment on Taiwan, Joe Biden said that Washington's policy has not changed and that “the United States strongly opposes unilateral efforts to change the status quo or undermine peace and stability across the Taiwan Strait,” the US said in a statement following the talks. which turned out to be much shorter than the Chinese communique.

White House Press Secretary Karine Jean-Pierre did not comment on the details of the phone conversation with the Chinese leader, simply saying that Biden and Xi had a “direct, frank conversation.”

“That's what you hear all the time from the president about the importance of conversations between leaders,” Jean-Pierre told reporters at a press briefing on Thursday. “But again, I'm not going to speak or characterize the Chinese transcript of the call.”

Noting that Biden and Xi have known each other for about four decades, Jean-Pierre said the calls have been “in development for quite a while.” According to Jean-Pierre, Biden's national security adviser Jake Sullivan offered to have the conversation in June when he met with his Chinese counterpart “as part of our efforts to maintain open lines of communication and manage relationships responsibly.”

By According to US officials, Biden and Xi have agreed to schedule their first in-person summit as leaders, but no details on the time or location have been provided.

Taiwan's foreign ministry said Friday it will continue to deepen its close partnership with United States in the field of security.

It was reported last week that Nancy Pelosi was planning a trip to Taiwan, although this has yet to be confirmed. Biden warned her against the trip, and Beijing threatened Washington with grave consequences if it took place. A visit by the speaker of the House of Representatives would be a dramatic, though not unprecedented, show of US support for the island.

Taiwan has complained about the intensification of Chinese military maneuvers over the past two years to try to force it to recognize Beijing's sovereignty.

Taiwan's military said Thursday it fired flares to warn a drone that was “scanning” a strategically located and heavily fortified island off China's coast, possibly probing its defenses. A senior Taiwanese official said it was a Chinese drone, probably one of the new CSC-005 drones. China has not commented on this information.

In 1997, China complained about then-Speaker Newt Gingrich's visit to Taiwan, but eventually swallowed its annoyance, writes The Guardian. Analysts fear that as Xi prepares for an extraordinary third term as China's president later this year, he would not want to appear weak in his response to such a move.

“If the US insists on going its own way and challenging China's bottom line, it will surely face a strong response,” warned Chinese Foreign Ministry spokesman Zhao Lijian. “All the ensuing consequences are borne by the United States.”

Chinese representative Hua Chunying called the talks between Xi Jinping and his American counterpart frank. This is the fifth conversation between the two leaders since Biden became president in February 2021.

>Chinese state media reported that Xi urged Washington to abide by the “one China principle” and stressed that China strongly opposes Taiwan independence and interference from outside forces.

While Taiwan has dominated the headlines recently, leaders have also spoken about other problems. For example, tensions around the South China Sea were at the top of the list Biden raised during the call.

The two leaders also discussed the conflict in Ukraine and bilateral trade, global supply chains and the ongoing food and energy crises, according to China's statement. Biden has previously said he is still considering lifting some tariffs on Chinese imports in an attempt to alleviate the domestic cost-of-living crisis.

No big announcements were made immediately after the talks. The US said the two leaders have instructed their teams to continue the discussion, specifically addressing climate change and health security issues.

When Biden last spoke to Xi in March, he warned of “consequences” if Beijing provided material support for Russia's actions in Ukraine, and the US government believes the “red line” has not been crossed in the following months.

As an equal branch of power, the executive power of the USA practically does not supervise travel of members of the Congress. China has become more powerful militarily and economically since Gingrich's 1997 visit, and some analysts fear that such a trip by Pelosi at a time of tension could spark a crisis across the 160km-wide Taiwan Strait.

Ali Wein, Sr. Eurasia Group analyst and author of America's Great Power Opportunities, said the talks between the two leaders would at least serve to reinforce the need to avoid miscalculations on Taiwan. According to him, the consequences of a military confrontation between Washington and Beijing will be much more devastating against the backdrop of a bitter conflict in Eastern Europe and a fragile recovery from the coronavirus pandemic.